The Bosnia Memory Project at Fontbonne University is dedicated to establishing an enduring record of Bosnian genocide survivors, especially those living in metropolitan St. Louis.

Help support the work of the Bosnia Memory Project and donate now. 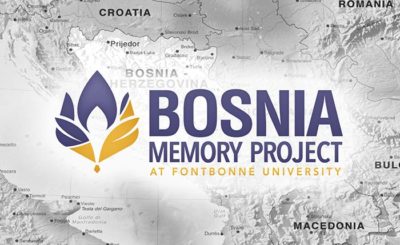 The Bosnia Memory Project is a historical and cultural preservation project directed at establishing an enduring record of the experiences of Bosnian genocide survivors, especially those living in metropolitan St. Louis.

In Their Own Words

The events of the war in Bosnia-Herzigovina are clearly now a part of St. Louis history – a part of its people who shape the culture, style and politics of the city. And now, Fontbonne students are helping shed light on this history, to show not only the pain of the past but also hope for the future.

The exhibit Prijedor: Lives from the Bosnian Genocide tells the story of genocide in the Bosnian city of Prijedor between 1992 and 1995. The exhibit was on view at the Holocaust Museum and Learning Center in Creve Coeur, Missouri, where it was visited by 10,729 people.

Fontbonne’s work with St. Louis’s Bosnian Community began in the fall of 2006 as an academic effort to develop understanding of St. Louis’s Bosnian community and the tragic events that account for its existence. Dr. Jack Luzkow (History) and Dr. Ben Moore (English) collaboratively offered an upper-division undergradute course titled The Bosnian Immigration: Narrative, Memory and Identity. The course was designed to blend traditional academic study of the origins and causes of the Bosnian war and genocide with interaction with Bosnian genocide survivors now living in St. Louis. Their intention was to help students see history through the eyes of those who lived it by allowing local voices to recount a tragedy of global significance.

As part of their preparation for teaching this course, Dr. Luzkow and Dr. Moore consulted Patrick McCarthy, an expert on Bosnia who has worked with St. Louis’s Bosnian refugee population since 1992. At the time, Mr. McCarthy had begun working with Jean Cavender, of the Holocaust Museum and Learning Center, and Amir Karadzic, head of the Union of Citizens of the Municipality of Prijedor, to plan a museum exhibit about the genocide in the Bosnian city of Prijedor. Fontbonne faculty and students and designer Barbara Nwacha (SIU-Edwardsville) joined in the planning and development of this exhibit, which became a very successful collaborative undertaking supported by four non-profit institutions, a variety of financial donors, and dozens of talented people. At St. Louis’s Holocaust Museum and Learning Center, Prijedor: Lives from the Bosnian Genocide was visited by 10,729 people and received substantial attention in the local and national media. Since then, the exhibit has been shown in nine additional venues, including the U.S. Capitol Complex on Capitol Hill.

In addition, faculty and students have continued to work collaboratively to:

We wish to thank members of the Fontbonne Community Connection for their generous support of the Bosnia Memory Project.

Prijedor: Lives from the Bosnian Genocide on Facebook
Visit Udruzenje Stanovnika Opstine Prijedor on Facebook
Visit The Prijedor Exhibit in USA Today
BHAAAS Newsletter
Survivor Stories by Randall S. Rosenberg
The Bosnian Institute
United Nations International Criminal Tribunal for the Former Yugoslavia
The Prijedor Report (U.N. Security Council)
Center for Survivors of Torture and War Trauma
St. Louis Holocaust Museum and Learning Center
Bosniak American Advisory Council for Bosnia and Herzegovina
We are using cookies to give you the best experience. You can find out more about which cookies we are using or switch them off in privacy settings.
AcceptPrivacy Settings
As we continue to monitor the status of COVID-19 and guidance from the CDC and St. Louis County, Fontbonne has implemented health and safety precautions for a return to campus.Learn more about the CARES Act and Griffin Return.
+