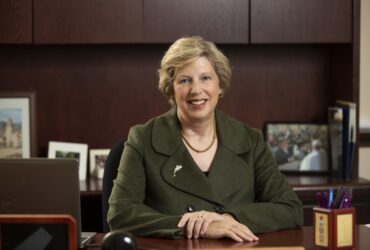 role of president in July 2020, but her inauguration was delayed due to the COVID-19 pandemic.

Dr. Blattner’s connection with Fontbonne began in 2004 when she served as Vice President for Academic Affairs and Dean of the Faculty until 2009. Thereafter, she assumed the presidency of Caldwell University, a Catholic Dominican university in Caldwell, New Jersey, where she served for 11 years.

During Dr. Blattner’s time at Caldwell, the college expanded its educational profile and achieved university status. The student population grew significantly; major renovations occurred including the building of a new chapel, and the number of doctoral programs increased, with the addition of the first such program in applied behavior analysis in New Jersey.

A lifelong Catholic and devout CSJ Associate, Dr. Blattner fell in love with Catholic higher education during her initial tenure at Fontbonne. “Fontbonne was my first opportunity to be in a Catholic institution of higher education, and I knew from that point on, I never wanted to leave Catholic higher ed,” shared Dr. Blattner. “I’ve been very fortunate to have been in Catholic higher ed now for over 16 years. So, when the opportunity arose for me to entertain the thought of returning to Fontbonne as it was searching for its next president, it was very easy for me to want to come back here to the people and to the community that I really cherished. It’s been a very nice homecoming.”

“Nancy maintained her ties to Fontbonne throughout our time in New Jersey,” said her husband Tim, “and we were excited last summer to be able to come home and reconnect with family and friends while Nancy returned to Fontbonne where her journey in Catholic higher education had begun.”

Long-tenured Fontbonne faculty and staff shared their excitement for Dr. Blattner’s return to campus. “I have known, admired, and respected Nancy Blattner for decades,” shared Fontbonne Librarian and Professor Dr. Sharon McCaslin. “Her faith, integrity, intelligence, loving concern, and commitment to education are unquestionably obvious. She is famous for getting to know and supporting everyone who works in the institution, without regard to status or rank.”

While the formal inauguration was delayed a year, Dr. Blattner’s presidential duties have been well underway for the past 14 months. Dr. Blattner shared that some of her aspirations include growing the undergraduate population, continuing to encourage diversity across campus, and showcasing the academic reputation of Fontbonne. During the past year, she laid the framework for Fontbonne’s next five-year strategic plan which outlines goals around development of new academic and co-curricular programs, community outreach and partnerships in the St. Louis region and beyond.

This summer, Dr. Blattner initiated the vision for the Summer Scholars Program, which afforded participants an opportunity to take two college-level courses for free over a four-week period. She introduced the Refresh program, a free opportunity for first-year students to retake and improve their grades in a designated course, while also building upon knowledge and skills.

Dr. Blattner has championed the efforts to expand academic offerings as well as sports offerings. Included among these initiatives is the introduction of a new BSN in Nursing, as well as the formation of a new collegiate sprint football program, both set to launch in fall 2022. As its originator, Dr. Blattner will serve as founding chair of the Board of Governors for the Midwest Sprint Football League, the first collegiate sprint football league organized in nearly 100 years.

Additionally, Blattner has worked with the College of Education and Allied Health to launch its first satellite program in Kansas City, MO that allows graduate students in the Speech-Language Pathology (SLP) program to earn their master’s degrees. “We are very excited to have Dr. Blattner back with us at Fontbonne,” shares Dr. Gale Rice, professor and dean of the College of Education and Allied Health Professions. “She is a genuine person who is an enthusiastic leader with an unwavering commitment to the Fontbonne community.”

Once her inauguration takes place, Blattner will focus on the planning of Fontbonne’s centennial celebration which will begin in August 2022.  Blattner stated, “The inauguration of a president, while an important event in the life of a university, pales in comparison to the celebration of an institution’s 100th anniversary.  I can’t wait to be part of this special milestone event next year and then guide the university as it begins its second 100 years!”

Dr. Blattner holds a B.S. in Secondary Education/English and an M.A. in English from Southeast Missouri State University and a Ph.D. in Educational Psychology from Southern Illinois University-Carbondale.

Fontbonne University is a private, Catholic liberal arts university located in St. Louis, Missouri, committed to transformative education and inspiring students to become global citizens who think critically, act ethically, and serve responsibly. The university was founded in 1923 by the Sisters of St. Joseph of Carondelet. For more information, visit www.fontbonne.edu.