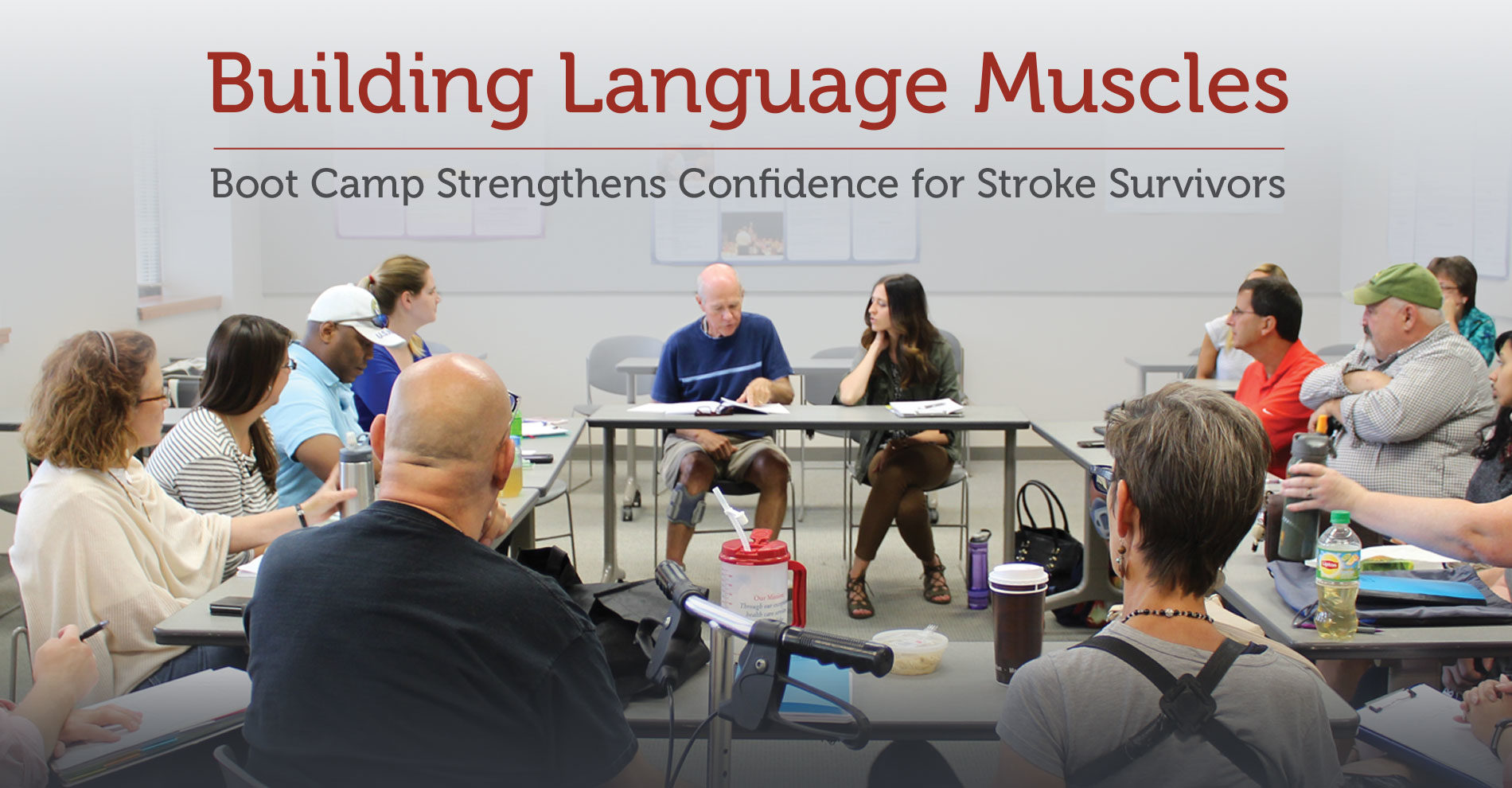 For years, 54-year-old Randy Miller worked in IT and sales at St. Louis-based Graybar. He traveled and spoke in front of audiences and clients all over the country. But after a stroke in 2014, he found himself nearly speechless. Initially, he could only speak about 10 random words. He and his wife, Rose, were forced to quit their jobs and turn his stroke recovery into a full-time commitment.

Miller experiences aphasia, language loss due to a stroke or brain injury. On any given day, he might not be able to correctly name the red, round fruit needed to keep the doctor away. Or he may refer to that apple as a different word entirely. It’s a frustrating condition that, coupled with the exhaustion of physical recovery, often leaves individuals and their caregivers depressed and isolated.

But the unique Aphasia Boot Camp at Fontbonne University helps those with aphasia reclaim confidence and self-assurance. And today, although Miller hasn’t regained the full language ability he had before his stroke, he is progressing. His good humor and wide smile are proof that, slow and steady, he is regaining his spirit, too.

“Before their therapy sessions, participants weren’t happy with their lives; they felt hampered by their communication ability,” said Dr. Carmen Russell, professor and chair of the department of communication disorders and deaf education. “After six weeks in boot camp, their scores on standardized language tests didn’t change, but their quality of life improved. They felt more confident. Boot camp gave them confidence to try, to get out there, to re-engage with the world.”

Traditional aphasia therapy prescribes one to two hours of therapy per week for one year — the point at which patients have traditionally been thought to plateau in their recovery. Russell and her team felt they could do better, so Fontbonne’s Aphasia Boot Camp was born as an intensive, six-week summer program. Clients, who must be able to tolerate the rigorous schedule, attend three hours of therapy each day, Monday through Thursday. Each day includes group therapy followed by one-on-one sessions tailored to each client.

While participants regain ownership over their own lives, graduate students gain practical experience as therapists.

“Our boot camp clinicians are second-year grad students,” Eaton said. “They’re learning how to work in group therapy, which is a much a different dynamic than one-on-one therapy. They’re incorporating traditional clinical interaction skills into functional, everyday activities.”

Ian Farmer completed his bachelor’s in speech-language pathology at Fontbonne in 2015. After taking a year off, he returned for his master’s. He helped facilitate the summer 2017 camp and benefitted from the intense training it provided him.

“It’s hard work for us and the clients, but it works — people get better,” he said. “I’ve loved seeing how much the clients support and complement each other in ability and life perspective. So far, it’s my favorite thing I’ve done since I started studying to become an SLP in 2011.”

Students, who are part of a specialty neurology track, move through their curriculum as a cohort. They take the coursework they need during their first year of graduate school, then serve as clinicians during their second.

“I spend a lot of my day planning and reflecting about therapy,” Farmer said. “Speech pathology is essentially complex problem solving. It can be a little overwhelming at times. But it’s fun.”

And it’s effective. A survey given to clients before and after boot camp shows positive improvement. Veterans of the program continue to attend group sessions to help and support others, even if they’re no longer officially enrolled in the camp. On their days off, clients get together voluntarily for unstructured conversation sessions. And a new service, Group Rehabilitation for Aphasia Communication Effectiveness, known as G.R.A.C.E., is taking off on Fontbonne’s campus. No school or private practice is offering therapy services like these within hundreds of miles, according to Eaton and Russell.

For Randy Miller, the therapy received from Fontbonne made the difference between having only 10 words at his command and having the ability to once again speak publicly. Miller prepared and gave a speech last fall at a fundraiser at Fontbonne President Mike Pressimone’s home.

“The group helps because being with other people with aphasia, you find that you’re not alone,” Miller’s wife, Rose, said. “They encourage you, and they spur you on.”