HomeAlumniThe Impact of Scholarship and Service 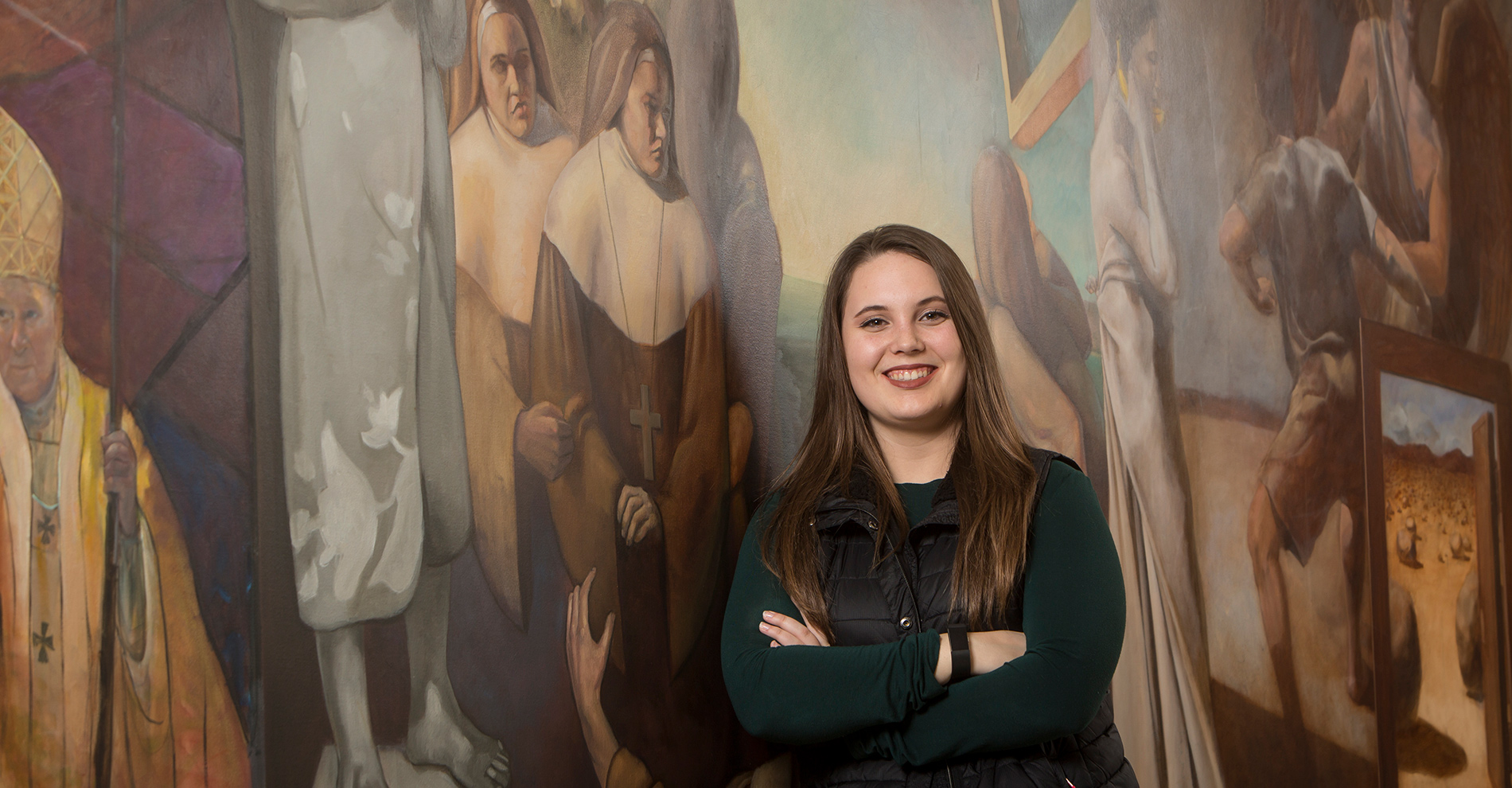 There are times in life when an unexpected voice tells you to listen. That was the message in October when student Kayley Cunningham – a soft-spoken general health studies major from Spanish Lake, Mo. – took her turn at the mic at Fontbonne University’s annual Scholarship Breakfast, an event that celebrates the university’s endowed and annual scholarships. She talked not about herself, but about serving others. And she caught the attention of the Fontbonne community.

“Service for me starts with a passion, ignites with a plan of action and spreads through proaction,” she told the crowd. “It is not about how much or what one gives, but how much we love to give. Our service should find its roots in what we love.”
Her words rang true for Fontbonne President J. Michael Pressimone, who followed her to the podium and paraphrased her message about service, reiterating it again at an all-campus meeting a few days later.

“Every now and then, there are moments that capture the hearts and minds of our community in significant ways, and those moments need to be held up for all to see,” he said later. “It rewards our persistence and affirms that the work we are doing is both necessary and transformative.”

As a student in the Hazelwood School District in St. Louis County, Cunningham was very involved in sports, student council and clubs, but she has always been interested in helping others. Today, she mentors other first-generation students and works as a Fontbonne ambassador, giving tours of Fontbonne’s campus to prospective students. She plans to graduate with a bachelor’s degree in biology, attend graduate school, and work as a medical and legal advocate for those, she said, “without a voice.”

“I am the first of my family to pursue my dreams through higher education,” she told the crowd at the Scholarship Breakfast. “But never for a moment have I been on my own through this endeavor. I have built relationships with faculty, staff and peers that have given me all kinds of new opportunities. When you do something for the love of doing it, you can always find the energy and the motivation to do it again, and you can share the passion you have created with someone else.”

A 4.0 student, Cunningham owes her education, in part, to those donors who helped make it possible. As the recipient of the Sister Margaret Eugene Tucker, CSJ Endowed Scholarship, Cunningham wanted to meet the woman in whose honor her scholarship had been named.

Sister Margaret, a 101-year-old Sister of St. Joseph, is a 1955 graduate of Fontbonne who also taught and worked in the administration for 25 years. Although she wasn’t able to attend the Scholarship Breakfast, she enjoyed a personal recitation of Cunningham’s speech and contributed her own thoughts about service.

“It’s also about self-development and the relationships you create,” Sister Margaret said. “People will remember.”

In her speech, Cunningham referred back to the CSJs.

“Mother St. John Fontbonne did not keep her passion to serve to herself,” she noted. “Even in times when she was forbidden to teach or care for the sick, her desire to serve was so strong she had to be imprisoned before she would stop serving those in need.”
The message of the Sisters of St. Joseph stands tall almost 100 years after they founded Fontbonne University. That message — and the support of the university’s scholarship donors who stand behind it — help sustain students even today.

“Every day, in ways large and small, I see examples played out of the transformational education that drives our work at Fontbonne University,” Pressimone said. “Kayley’s comments provided a wonderful example of how our students are transformed over time. It demonstrated how their natural gifts can be cultivated and enhanced in an environment like the Fontbonne University community.”

“When I was a student at Fontbonne, I had no idea what it took to run a university,” said Barbara Atteln ’67. “After I graduated, I didn’t set foot on campus for 40 years. I made my annual donation, and that was it.”

But in 2007, friends from her class got together to celebrate their 40th reunion and attend the annual alumni reunion. Shortly thereafter, a group of alumnae formed the Fontbonne Community Connection, a women’s giving circle, and they contacted her to become a charter member.

Soon, Atteln, a former IBM systems engineer, had her finger on the pulse of higher education and stepped back onto campus regularly.

“I was the first one in my family to go to college. I received a half-tuition scholarship to attend Fontbonne,” she said. Hearing about the debt students were taking on to attend school, she started contributing to annual scholarships, which are awarded until the entire donation has been given away.

“Someone said to me, ‘As long as you’re putting in all this money, why don’t you create an endowed scholarship?’” she said. Donors can endow a scholarship with a minimum gift of $25,000. The interest is then awarded to students every year, while the principal remains part of the university endowment.

Atteln initially named the scholarship after her deceased father, who was a machinist. She added her mother’s name to it when she, too, passed away.

“I keep contributing to my endowed scholarship annually. Each year, the value of it goes up,” she said. “I’ve met many of my scholarship recipients, and they often participate in sports. It makes me happy that by helping pay off their tuition, they can play more sports and not worry as much about student debt.”

Frank and Ruth O’Neill Stroble ’52 contribute to many institutions and causes, but scholarships are close to their hearts.

“Education is a step up,” said Ruth. “We both received scholarships and want to share these opportunities with others.”

The Strobles are both first-generation college graduates who grew up in South St. Louis. Frank graduated from Saint Louis University the same year Ruth graduated from Fontbonne College. They married the following Valentine’s Day and celebrate their 65th anniversary this year.

With three scholarships at Fontbonne, they have had the opportunity to meet many of their students over the years and count the students to be among their many blessings. They also feel it’s important to support organizations that help with basic human needs of food and shelter, such as Catholic Charities and the St. Louis Post-Dispatch 100 Neediest Cases.

But Ruth has never been far from her Fontbonne family.  She chaired a capital campaign and served on and off of Fontbonne’s Board of Trustees for 24 years. She has served in many other areas and now is trustee emeritus.

“God has been good to us,” she said, “and we want to share some of our blessings with others.”

Since Dr. Mary Abkemeier was a child, she remembers her parents telling her, “Mary, you can do whatever you want.”

Her family wasn’t wealthy. Neither parent attended school beyond eighth grade. But they made sure each of their six children attended college. So when Abkemeier and her husband, Bill, decided to create a scholarship, they named it after her parents.
“My parents would be deeply touched if they could help someone not go through the pain and worry of paying for college,” she said.

As professor and chair of the mathematics and computer science department, Abkemeier has spent her career at Fontbonne, seeing it grow and change from a college into a university. And she has dedicated much of her time to serving others, from the homeless to the imprisoned.

For decades, she has coordinated monthly meal services for those in need, provided hands-on support with Criminal Justice Ministries, and served homeless women at the Grace and Peace Shelter. She is quick to add that she could not do most of these volunteer activities if it weren’t for the assistance of her husband. She has a full life, lived often in service to others, and contributing to the lives of her scholarship students is an added bonus.

“I’ve always been proud of them, and I get to see them flourish through the years,” she said. “I’ve always been of the opinion that I was an extremely lucky person, blessed with wonderful parents and family, good health, and lots of energy. In my opinion, it is the luck of the draw. I was given many gifts and need to make sure I’m a good steward of them.”