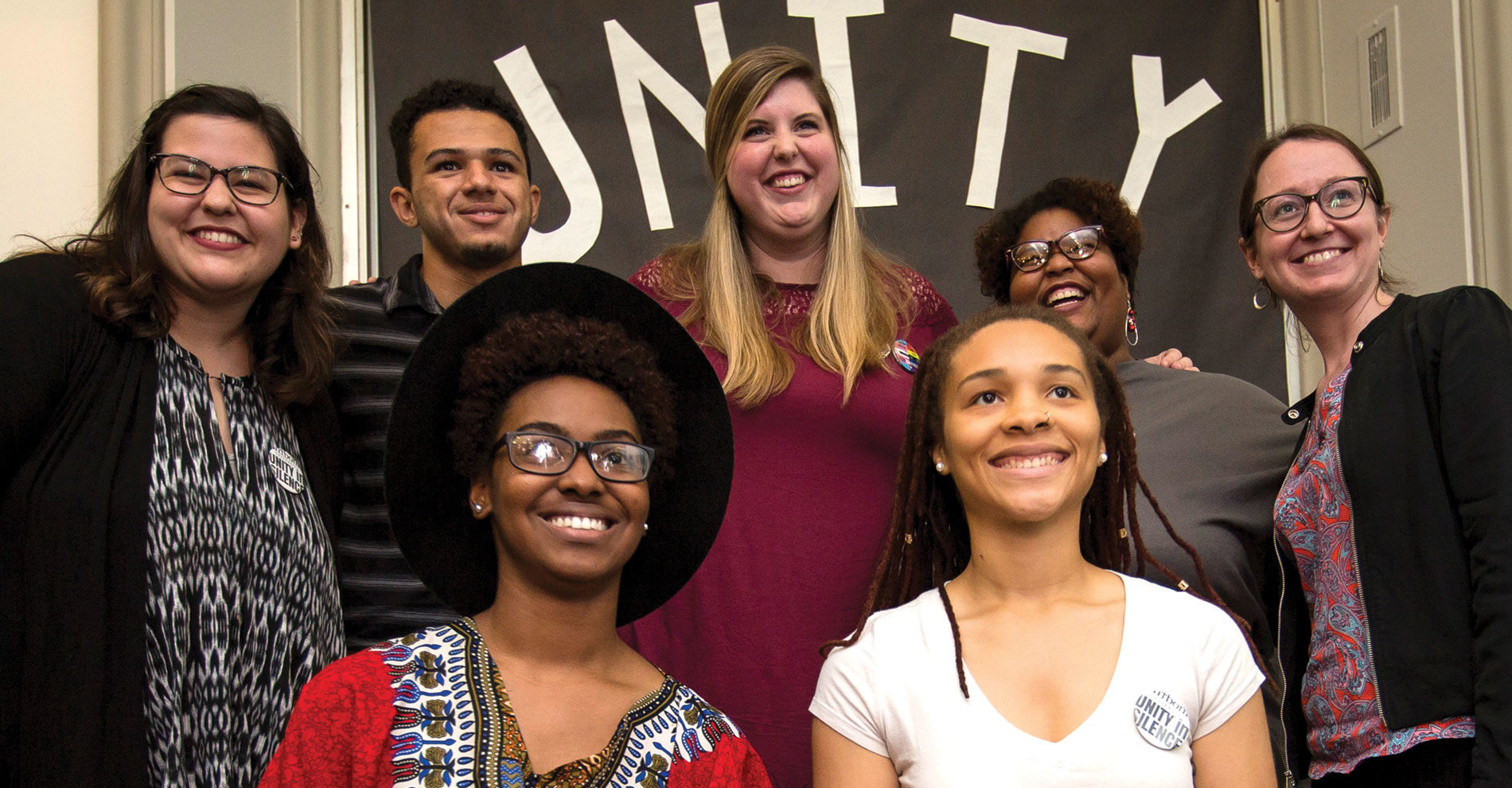 During the summer of 2016, an informal group of Fontbonne University faculty, staff and students gathered to discuss the numerous acts of violence that rattled the nation. The conversation led to a variety of initiatives, including the student-led Unity Movement, a two-day event that took place in October, intended to prompt action and foster unity across issues that divide us. Here, professional writing major Quinn Wilson, one of the event’s organizers, details the event itself and the organizers’ hopes for the Fontbonne community.

At Fontbonne, the Unity Movement came to life Oct. 17 and 18 and continues to resonate throughout campus. After a year that seemed full of growing disparities and division, we felt that a call for unity was needed more than ever.

Fontbonne student Jaylah Jones, the Unity Movement’s main organizer, said the idea for the event emerged after she witnessed in the news various tragedies occur around the nation as well as in her own community over the past two years. For her, the boiling point came after a hellish week in early July — Alton Sterling, Philando Castile and five members of the Dallas Police Department were all dead by week’s end. Jones remembers being in her room, looking at her phone, when she was struck with the idea for the event. She observed a lot of talk on social media — and no action.

“I didn’t want to be that person,” Jones said. She was prepared to organize and act.

During a meeting over the summer between faculty and staff members and a handful of students, the group reflected on previous tragedies that had occurred in the country. Jones presented her idea to the group. The proposed event was well received and supported. Moving forward, Jones assembled her team to aid in the planning of the event, which included

A candlelight vigil in the Golden Meadow kicked off the two-day event. Prayer and song aided the reflection. Participants were given the opportunity to write their causes on luminary bags, which were publicly displayed in the Golden Meadow for the evening. Each attendee held a candle during the vigil, and lit it with help from others. As the night reached its end, participants extinguished their candles and left in silence for the remainder of the evening.

The following day we called the “Day of Silence.” Each individual participating vowed not to speak throughout the day, representing those whose voices have been silenced. In the late afternoon, participants joined the rest of Fontbonne and the surrounding community in the Arnold Memorial Center for a “Breaking of the Silence” celebration. In attendance were various students, faculty members from a diverse range of departments, members of the local community, and Fontbonne’s president Dr. Mike Pressimone and his family.

That evening, Live Culture, a band featuring Fontbonne alumus Roy Jones Jr., performed alongside Matt Austin, a current student, who is a DJ known by the stage name RDTR.

The most remarkable part of the evening was the attendance of organizations from the St. Louis area. These organizations’ purposes ranged from religion, to youth empowerment, to LGBTQ advocacy, and they included the International Institute, the Center for Social Empowerment, Big Brothers Big Sisters, PROMO STL, Angel Baked Cookies, Safe Connections and the Sisters of Saint Joseph of Carondelet.

“I believe that an idea was planted: If everyone comes together for a cause, there can be a change — a change that happens first within us, and then is shared throughout the community,” said Jones, who would love to host this event or another like it in the future with the same end goal in mind.

Jones still believes there is work to be done, not only in the United States, but within Fontbonne’s community. She heard an array of comments of confusion or indifference throughout the “Day of Silence.” Although she wanted to address them, she chose instead to listen and absorb the reality of what was going on around her. Jones concluded that it was the “Day of Silence” that left the largest impact on the campus community. Silence illuminated our community’s progress, she said, as well as the shadows that remain, waiting to be brought into the light.

For me, the most meaningful part of the experience was piecing it together. I feel I was part of something much bigger than myself or just the Fontbonne community, and I helped make a difference in the larger community and the rest of the world. This goes down as one of the most impactful events I have ever experienced.

Learn more about Service, Diversity and Social Justice on campus.